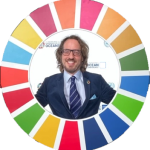 In September 2018 I went to Bogotá to present a new important research programme at The Economist Events’ War on Cancer Latin America conference. Our study on Lung cancer in Latin America: Time to stop looking away introduced the Latin America Lung Cancer Traffic Lights, a unique new tool by our team at The Economist Intelligence Unit that assesses the policy response to the deadliest cancer in the region.

Our policy traffic lights show that addressing stigma should be a starting point for an effective policy response in the region. The traffic lights can help lung-cancer stakeholders, including policymakers, patient advocates, healthcare professionals and the media, to identify the policy areas that require attention for each of the 12 countries.

Highlights from the research:

The Economist Intelligence Unit (EIU) has carried out two complementary studies on lung cancer in Latin America: an analysis of the economic costs and an assessment of the policy response (the Latin America Lung Cancer Traffic Lights).

The report “Lung cancer in Latin America: Time to stop looking away”, commissioned by Roche, investigates the economic burden of lung cancer in 12 Latin American countries together with the state of policies and outcomes to control it in the region.

In the 12 Latin American countries included in the study more than 60,000 people die each year from lung cancer (12% of all cancer deaths). The EIU estimates the direct costs of lung cancer for the year 2016 at US$823m in Brazil and at US$1.35bn for all 12 countries combined, including diagnosis, treatment and palliative care. Indirect costs (arising out of lost productivity from work absence and early mortality) are significant too, at US$286m for the 12 countries.

Despite this substantial societal impact, there’s surprisingly low funding for lung-cancer research and care. Experts and surveys highlight that high mortality and stigma seem to be major root causes for this neglect.

As a result of stigma and high mortality, lung cancer seems to be treated as a second-class cancer. Some public health coverage programmes do not even cover lung cancer, for example Mexico’s Seguro Popular and Chile’s Régimen de Garantías Explícitas en Salud.

Stigma also plays a role in social isolation for patients and in the low levels of lung-cancer advocacy in the region. We found no evidence of any study country with a formal effort, either self-standing or as part of the national cancer control plan, to address lung-cancer stigma.

The EIU assessed stigma as part of the “early diagnosis” category in the Latin America Lung Cancer Traffic Lights, a new tool to evaluate the policy response to lung cancer in the region. Stigma was the only indicator on which every country received a red light (indicating an urgent need for attention).

Moreover, he is a trustee of the New Economics Foundation (a think tank focusing on social, economic and environmental justice), a member of the Advisory Committee for the UN Environment Programme’s Global Environment Outlook for Business and a faculty member in the Food & Sustainability Certificate Program provided by the European Institute of Innovation for Sustainability.